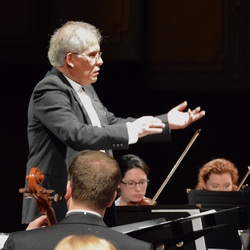 Augusto Diemecke started his violin studies at the age 11 with his father Emilio Diemecke. Mr. Diemecke continued his violin training with Joanna Maikovska, Enrique Espín Yépes, Jorge Risi, Manuel Suárez, Fredell Lack, and Kenneth Goldsmith. Augusto has participated in Master classes with Itzhak Perlman, Henrik Zsering, and Sergiu Luca. He is a graduate of the Conservatorio Nacional de Música in Mexico City and holds a Licensiatura in violin performance from Ollyn Yolitztly school of Music in Mexico. In 1982, Mr. Diemecke won the first price in the Concurso Nacional de violin in Mexico City.

Mr. Diemecke is a very active performer. He has played with many Orchestras such as Mexico City Philharmonic, OFUNAM, Guanajuato Symphony, Houston Symphony, Houston Ballet Orchestra, CCO, Orchestra do Norte do Portugal and has served as Concertmaster with Orquesta Philarmonique du Tuornon, in France. He is currently the concertmaster with the Orchestra of the Southern Finger Lakes (OSFL). As a soloist he has performed with Guanajuato Symphony, Morelia Symphony, Orquesta Ollin Yolistly, Orquesta de Cámara de Bellas Artes, The Corning Youth Orchestra, the North Houston Symphony, Orquesta do Norte do Portugal, and The Colgate Symphony. He has performed Chamber music recitals in France, Portugal, Perú, Mexico and the United States.
​
Augusto Diemecke has been teaching violin since 1988. In 1991, he began his training in Suzuki pedagogy at the Ithaca College Summer Institute. Augusto has taken training courses with Daphne Hughes, Linda Fiore, Marilyn O’Boyle and Carrie Reuning-Hummel. He has been a faculty member at CSMA since 1993. In 1997, he joined the faculty of Ithaca Talent Education (ITE) as a violin teacher, and has been conducting the Pochino Orchestra for the past 2 years. In the year 2000 Mr. Diemecke organized a tour for the ITE advanced violin ensemble tour group to go to Mexico, through various cities such as Guanajuato, Zamora, San Miguel and Salamanca.

Mr. Diemecke has been a guest clinician at Vermont Suzuki Strings camp, New Hampshire workshop, Gabriel Foure Orchestra training camp in France, Corning Strings Summer Camp, and the Lima Perú Festival. He is also the co-director for the Guanajuato, Mexico Suzuki Festival each September.
Return to the Conductors Page