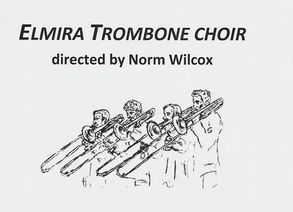 ​The Elmira Trombone Choir presents a diversified program mix from Baroque, classical, romantic, impressionistic, and modern eras as well as entertaining arrangements of folk and popular music.  Following in the tradition of the world famous Eastman Trombone Choir founded by Emory Remington in 1941, The Elmira Trombone Choir has grown to include many of the best trombonists in central New York, including members of the OSFL, Binghamton Symphony, Tri-Cities Opera, Cayuga Chamber Orchestra, Williamsport Symphony, as well as faculty from Hartwick College, Binghamton University and Mansfield University.  Performed by a harmonious blend of 8 trombones and bass trombones, this performance showcases the OSFL trombone section: Norman Wilcox, Duane Smith, and Craig Harrigan.
Listen to the interview with Norman Wilcox that was aired on WSKG radio.


For a short time, you can hear the audio recording of this concert at
​https://soundcloud.com/user-705785148/elmiratrombonechoir04052019/s-WZuiK
​Previous Concerts from This Season
This narrated composition spins the tale of a soldier who trades his violin for a magic book that can tell the future and make him rich.  He soon discovers he has made a deal with the devil and that money does not bring happiness.   With this performance we celebrate the 100th anniversary of the end of World War I and the 100th anniversary of this composition written by Igor Stravinsky in 1918.

Completed and first performed in 2008, Mark Twain’s Music Box is the product of a collaborative effort between Franc Laux and Elmira College’s Center for Mark Twain Studies.  Mark Twain’s Music Box explores the important role of music in the life of Mark Twain. This concert provides the unique opportunity to teach history through music and expand music through history as we delve into Mark Twain's fascinating, humorous, and complex relationship to music.