Marietta Cheng is the Conductor Laureate of the Orchestra of the Southern Finger Lakes. She served as Music Director and Conductor of the OSFL from its creation until May of 2008. From 1986 to 1995, Cheng was Conductor of the Corning Philharmonic.
Ms. Cheng is Professor of Music and Conductor at Colgate University and chair of the Music Department. The Colgate University Orchestra, under her baton, is one of the best liberal arts college orchestras in the country. Cheng has appeared as guest conductor of the Chautauqua Symphony Orchestra and the Hudson Valley Philharmonic. 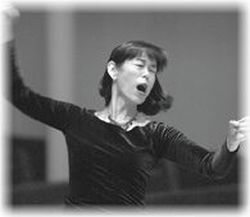 As a choral conductor, Marietta Cheng served four years on the conducting faculty of the Aspen Music Festival where she taught conducting, oversaw choral placement, and prepared choruses for musical luminaries including Robert Shaw, Jorge Mester, Fiora Contino, and John Nelson. Cheng was also the Conductor of the Colgate University Chorus and Chamber Singers and the Syracuse Vocal Ensemble.

As a pianist, she has been a soloist with the Boston Pops Orchestra under Arthur Fiedler. She performs chamber music frequently, having often collaborated with the Manhattan String Quartet, the Southern Tier Chamber Players, and at Colgate University. 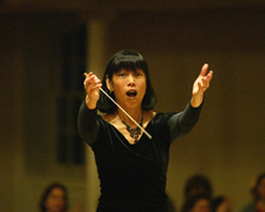 Ms. Cheng has been a national spokesman for issues on women. She appeared on CNN about on her role as a woman conductor. She has written many articles on women in music for major urban papers across the United States, and has given numerous radio interviews.
In addition to her work at Colgate, Ms. Cheng's university positions include Conductor of the University Symphony Orchestra at Binghamton University and Associate Professor of Music and Conductor of the orchestral and choral programs at Haverford and Bryn Mawr Colleges. She is an active lecturer, specializing in composers of the romantic period. In 1998, she was the guest lecturer at Carnegie Hall for a Teachers' Symposium on Tchaikovsky. ​Ms. Cheng holds degrees from Smith College and the New England Conservatory of Music.

"She is a trailblazer and role model… She has done wonders. How fortunate we are to be blessed with the multi-talented Marietta Cheng." (The Leader, Corning, NY)

Return to History of the OSFL